We explore some cool data on first names and introduce a library for making this data available. We then use k-means to find the most trending names right now, and introduce some ideas on age inference of users.

One of the first data science books, though it wasn't labelled that at the time, was the excellent book "Freakonomics" (2005). The authors were the first to publicise using data to solve large problems, or to use data to discover novel details about society. The one chapter that I still deeply remember is their chapter on using first names from the US Census data to understand how first names change over time.

For example, the first name "Sandra" has been a very popular name over the past century, while "Brittany" has a brief period of intense popularity during the 80s and early 90s before fading out. What are the results of this difference? If we extrapolate the year of birth until now, then most "Brittany"s now are between the ages of 15-29. In fact, you can be almost certain they are between these ages. On the other, "Sandra" has had a more sustainable popularity, but the name peaked in 1947 and has declined since. Below we plot the current ages of everyone in the US with first names "Brittany" or "Sandra" 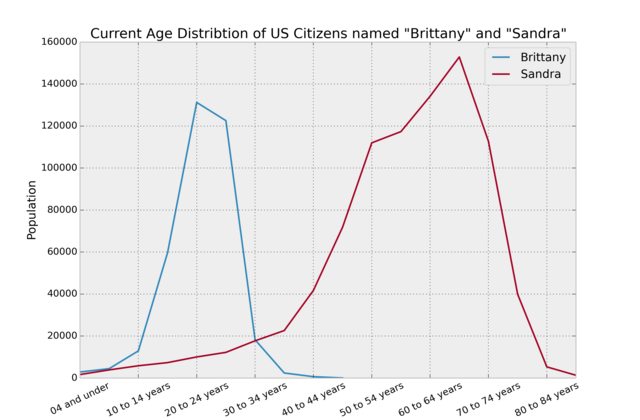 Freakonomics was the first book to bring this really cool idea, using first names to determine ages, to light. I was so inspired that I rushed out and gathered all the census data so I could play around with this myself. This inspiration finalized in the Demographica library (Latin for "population-drawing"), an easy way to query this data and answer questions about first names and age. Ex:

What are the names that are most stereotypically senior?

To do this, we can just look at the most common names in the 85 years and over bucket: 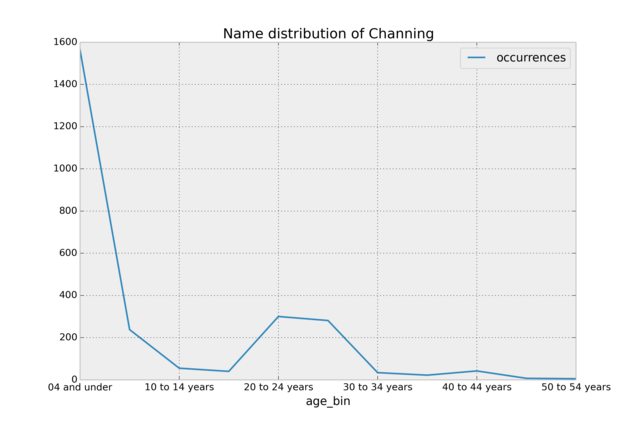 I tried to think of some statistical ways to do this: compute the rate-of-change of the graph and determine some statistical thresholds, or create some complicated if-statements, etc. I didn't feel these were inspirational ideas. The idea of k-means crossed my mind, but I don't like using k-means on time series data - it just feels wrong. But, I did it anyways. Using some Pandas magic, I normalized each Male name to a probability distribution over the age buckets, and removed the bottom 90% of all names: this resulted in a list of 1300 popular names and their age distributions. (Why remove the bottom names? Name popularity are power-lawed - most names don't have enough data to form an accurate probability distribution.)

Using scikit-learn and its K-Means implementation, I clustered the distributions into 12 clusters (arbitrarily picked 12). Here are the resulting centers of the clusters: You may laugh at that last list, until your own daughter brings home a Bently to meet the family

Me too, so I did the same analysis for Female names, below: My friend who I was hacking on this with asked "Find some names that were massively popular for a very short period of time". To do this, I increased the value of k to 35, and plotted the cluster centers (Why? I knew a name like that would have a very spiked distribution, and if I plotted it it would stand out among the others - but I needed more granularity in the clusters to find it. So I increased k to 35): /p> Bingo. That peaked distribution contain the names we want. Only two names were in that list: Catina and Katina. Both were massively popular about 40 years ago. A quick google search on Katina (the more popular to the two) determined the name was used for a newborn baby on the soap opera 'Where the Heart Is' in 1972.

That's the idea, at least. I'll report back with how it goes!